How to Create a Vector Character 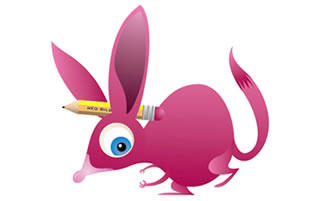 As part of a series of tutorials that will follow the development of the Red Bilby brand, this tutorial walks you through the creation of a vector character logo using Adobe Illustrator and Photoshop CS4.

Michael is a freelance designer and Creative Director of Red Bilby – a boutique design studio in Melbourne, Australia. In this example I had decided on the company name (Red Bilby) before I began creating the character so the starting point for the design was a Google image search for ‘bilbies’.  Remember, images found through Google images are mostly copyright protected so they should only be used as a point of reference.

The starting point for character design is always doodling on paper with a pen pencil or anything else that can make a mark. So draw, draw ,draw!

TIP: You never now when you will get an idea so if you carry a small sketch book with you where ever you go you’ll be able to record that flash of inspiration. After you narrow down your roughs to something approaching the design you envisioned, continue to refine the design trying different variations and noting improvements for the next round of roughs. Once you are happy with the pencil sketch it’s time to fire up the Mac. Scan the pencil drawing and save it. Open Adobe Illustrator and setup a new artboard. It’s best to create a logo for print, that way you will have a hi-res vector image that can be resized to suit other formats. I’m in Australia so I always setup a file as A4.

Open the Layers palette and rename the default layer “sketch”. Place the scan of the pencil drawing on this layer. This will serve as a guide for the illustration. Set the opacity of the scan to 20% and lock the layer. Create a new layer above this layer and call it “head”. Using the pen tool draw the head shape. Once you have drawn the shape fill it with a colour.
TIP: Set the fill colour to “none” and set the stroke colour to something that will be easy to see over the scanned drawing. Red works well.
If you don’t do this the fill colour will obscure the scan making it difficult to see where to add the next line node. Create a new layer for the snout and continue drawing with the pen tool.

TIP: Creating separate layers for your character elements means you can easily export them to flash if you need to animate the character in the future.

Continue creating new layers and drawing the elements for each part of the character. You will end up with a layers palette like the one below. To create the eye ball draw a circle using the “Elipse tool”. We will add finished colour as we go, as this helps to get the look right from the beginning. Create a new gradient swatch that fades from a vivid blue to very pale blue and save it to the swatches palette.

Select the “Star” tool and set it to create an 18 point star with the radius dimensions shown below. Draw a star and fill it with a medium blue.

Draw another circle with the “Elipse” tool and fill it with black. Draw a small white circle and move it to the top left of the black circle. This creates the shine on the eyeball. Now combine all the four eye elements together and group them.

Draw another circle with the “Elipse” tool and position it on the head element. Hold down the “shift” key and select the circle and the head. From the “Pathfinder” palette click “Minus Front”. This cuts out a hole in the head of the character. Draw another circle and use the same technique to cut out the eyelid element – seen in black below. Move the eyeball into position behind the cutout in the head you just created. You can move the eyeball around to see what looks best. Again, having separate elements like this is really useful if the character is going to be animated in Flash or Toon Boom Studio. Now it’s time to get the colour right. Setup the colours you will use for the body in the swatch palette.

Use the “Gradient Tool” to fill the various body elements of the character. Pay attention to how light would fall on the surfaces and adjust the direction of the fills to give the shapes dimension. Add the finishing touches – spots and shine on the snout, gradient fill to the inside of the ears and a darker coloured piece to the tip of tail. Finally add the pencil between the ears and we’re nearly done. The final touch is to add some shadows under the leg, below the pencil and on the floor under the character. For this I use Photoshop CS4. Open the .ai file in Photoshop. It will open on a transparent background. Hold down the “command” key and create a new layer under the .ai layer and fill it with white. Create another layer above this and call it “shadow”. Draw a flat ellipse with the “Ellipse Selection” tool and fill it with black. Deselect the ellipse and apply a 6 pixel Gaussian Blur to thee black ellipse. Now the part I love. Apply a motion blur to the black ellipse. See the settings below. This gives the shadow a nice subtle fade on both edges and makes for a much more convincing shadow. Reduce the opacity to around 15%. All that’s left to do is select the end on the pencil. Use the pencil tool to select the end of the pencil and part of the body. Use a soft brush tool with the settings below and paint a shadow on a new layer. Adjust the opacity if it looks too dark. Do the same with the front leg and that’s it! We are done! Export the file as a psd or png if you are going to use it for the web and save a hi-res psd for use in print. In the next post we will walk you through creating a Style Guide in Adobe InDesign CS4.